What Growing Up in Sulphur City Taught Me About Beauty

I was born in a crater.

My Northern Ontario birthplace was formed 1,849 billion years ago when a 10-kilometre-wide meteorite—actually, now they’re saying it was a comet—travelling at 8 times the speed of sound crashed to the earth. The massive impact formed what is now known as the Sudbury Basin, the earth’s second-largest crater at 62 km long and 30 km wide.

That sucker punch from outer space filled the earth’s sunken face with molten rock containing nickel, copper, platinum, palladium, gold, and other metals. It took centuries for the pulverized rock to cool, and until the late 1800s for settlers in the Sudbury Basin to figure out they were sitting on, literally, a gold mine.

By the time I was born in 1974, the city’s mines—Inco and Falconbridge—were two of the world’s leading producers of nickel. I grew up playing under giant plumes of sulphurous smoke belched by Inco’s massive smokestack at the refinery. My friends and I scrambled over the lunar landscape of rocks turned black by the copper smelting process. Some nights, Mom would drive my sister and me to see the slag being dumped by the mines. We’d sip milkshakes and watch the hot, lava-like substance spill down the side of a hill, mesmerized by its beauty.

For that’s what Sudbury was to us, then: the magical, pockmarked backdrop upon which our imaginations could roam freely. With a little creativity, rocky outcrops became British boarding schools. Grassy backyards became stages for elaborate dance recitals. Graveyards became sites of espionage and intrigue as my sister and I hid behind tombstones, pretending our pointed fingers were guns.

OK, we were strange children.

But as Ray Bradbury puts it, “Trains and boxcars and the smell of coal and fire are not ugly to children. Ugliness is a concept that we happen on later and become self-conscious about.” (That’s from the introduction to Dandelion Wine).

Indeed, I did grow self-conscious about Sudbury in my teens, especially after I moved away. “I’m from Sudbury,” I’d say apologetically to other Canadians, who’d laugh and say, “Ah, yes, the armpit of Ontario” (it turns out other cities like Hamilton share this dubious moniker as well). But now, after a visit back home this summer, I realize Sudbury is actually the heart of Ontario. For me, anyway.

The city’s greening efforts—they’re now growing trees in the mines!—have, over the decades, transformed Sudbury into quite a leafy, picturesque city in many places. Art is springing up all over town, too, thanks to Up Here, an emerging art and music festival. There are hundreds of freshwater lakes scattered throughout the area. And, of course, Sudbury is home to friends and family members—including my father, my wonderful step-family, and my indefatigable grandmother, still going strong at 100. 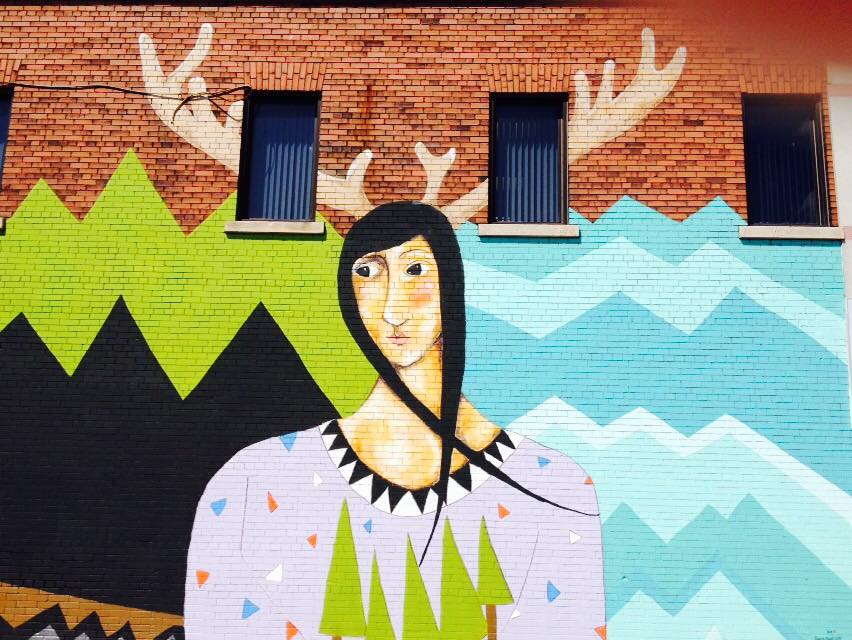 However, the giant smokestack, now owned by a Brazilian company called Vale, still remains. The weather-beaten roads are potholed and plastered together with asphalt and tar. There are defunct breweries, shambling shacks, and, yes, graffiti-covered boxcars. At its core, Sudbury remains Sudbury—a hardscrabble frontier town built in a crater that was created when the cosmos decided to give the earth a walloping clout on the chin. Sudbury is gritty, tough, and has gold at its core—both the chemical element and the people. And that’s a beautiful thing.

As a child, my imagination sprouted in the somewhat barren Sudbury of the 1970s and ’80s—just like the seedlings that now grow in Vale’s greenhouse, 4,800 feet below the earth. It has taken me several decades to really start mining my creativity and publishing essays and poems, but if I keep going, perhaps I’ll hit gold one day.

Or perhaps not. But if my hometown has taught me anything, it’s the power of perseverance. In any case, I’m enjoying digging deep into my past and present for material. Sometimes, I stumble over subject matter that, at first glance, seems quite bleak—chronic illness, death, mortality, and madness, for starters. Fortunately, Sudbury has trained my eye to see the beauty shimmering beneath the soot.

Who wants to spend their days sitting at a desk, poking around such bleak emotional terrain, you might well ask?

I do.  The landscape is incredible.