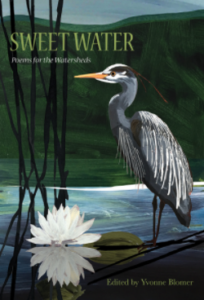 I’m thrilled to have my poem “The Last Lake Sturgeon” published in Sweet Water, the second book in the Refugium Trilogy by Caitlin Press. Edited by Yvonne Blomer, this anthology of poetry explores our impact and reliance on the watershed.

As the editors have written: “In Canada the watershed runs into the Pacific, Arctic, Hudson Bay and the Atlantic. This sweet water houses the aquatic ecosystems that feed and nurture not only the people, industries and animals on land but also drains into the world’s oceans. Industries, dams and pipelines threaten the very life force of living species and the land on this plant. In this second book, following on Refugium: Poems for the Pacific, Yvonne Blomer is calling on poets to find the metaphors and language for a new revolution, one that will travel into the thoughts of readers and create openings in them that could lead to change. Without change, poems, music and stories may be the only refugium of these waters and the creatures in them.”

Two of my poems—”See You Sometime” and “Meghan Meets the Queen”—were published in the Spring 2019 issue CV2. What an honour to be published alongside Anne Michaels and Doyali Islam, among other fine Canadian poets! (Side note: I saw Doyali read some of her split sonnets here in Victoria. What a talented poet and delightful human being!) 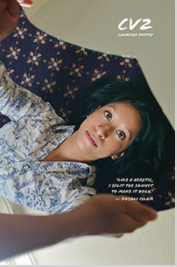 It was an honour to be shortlisted for the 2018 WordsThaw Poetry Prize, sponsored by UVic and The Mahalat Review, and judged by Governor General’s Award-winning poet and author Arlene Paré.

I’m delighted to announce that two of my poems—”Wind Instrument” and “Big Bang”—have been published in the 46/3 issue of EVENT Magazine. 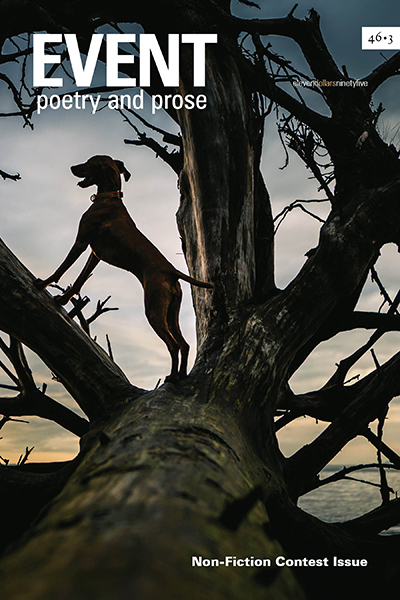 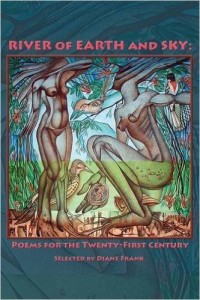 River of Earth and Sky

River of Earth and Sky

In 2015, I published several poems in River of Earth and Sky—Poems for the Twenty-First Century (2015, Blue Light Press), an anthology compiled by San Francisco-based poet Diane Frank. It’s a thrill and an honour to find my poems alongside those of Jane Hirschfield, Stephen Dunn, Kim Addonizio, Rustin Larson, and other poets I’ve long admired.

Praise for River of Earth and Sky:
“Congratulations on this fantastic coming together of voices.” -Jane Hirshfield, author of The Lives of the Heart, The Beauty, and Nine Gates: Entering the Mind of Poetry

“Anywhere I turn to read, masterly and compelling work.” -Robert Scotellaro, author of Measuring the Distance and Rhapsody of Fallen Objects

Read a few of my poems from this collection.

Arising From the Mist 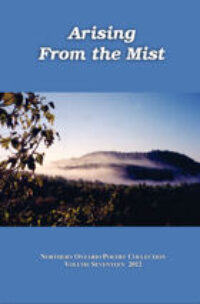 Arising From the Mist 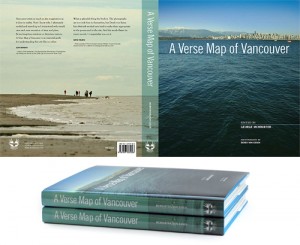 A Verse Map of Vancouver

A Verse Map of Vancouver

I spent a year in Vancouver and got a great publication out of it! In 2009, Vancouver’s inaugural poet, George McWhirter, compiled a beautiful anthology of poems that honour the city’s faces and places. The poems are set alongside Derek von Essen’s diverse, atmospheric urban photos.

From the back cover:

“A Verse Map of Vancouver fills the gap in Vancouver’s verse geography by mapping the city, its neighbourhoods, its corners and intersections, its parks and landmarks. A Verse Map is a word ordinance survey by poets of the locality, from those whose names have a legendary place (Pat Lowther, George Woodcock) through a roster of verse surveyors—too great a list to include them all here—who have established themselves over the last three to four decades (John Pass, Evelyn Lau, John Donlan, Daphne Marlatt, Roy Miki, George Stanley, Linda Rogers, Tom Wayman, Meredith Quartermain, Kate Braid, Brian Brett, Bud Osborn) on through to the current generation who are etching their marks on the city (Catherine Owen, Rita Wong, Chris Hutchinson, Mark Cochrane, Russell Thornton, Kuldip Gill, Fiona Lam).”

Leaves By Night, Flowers By Day

Rustin Larson’s poems have appeared in The New Yorker, North American Review, The Iowa Review, and other journals. He is a five-time Pushcart nominee and has published numerous collections of poetry, including The Wine-Dark House (Blue light Press).

Nynke Passi is director of The Luminous Writer Literary Center. Her story “The Kiss” was nominated for a Pushcart Prize and her essay “Oom Ealse and the Swan” was a finalist in the 2014 Jeffrey E. Smith Editor’s Prize of The Missouri Review. Her writing has been published in journals including The Gulf Coast Review and The Anthology of New England Writers. 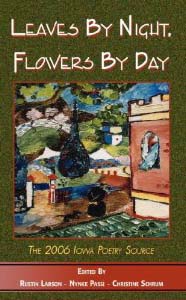 Leaves by Night Flowers by Day